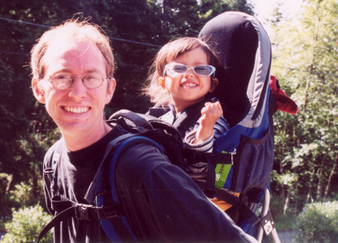 Here's a video of my postdoc work @ UBC.

Status Nov 08/2008: Back to Microsoft! I'll be joining the Windows Live Experience Team as an Applied Researcher, starting Dec 1.

News as of March 07: I was a Senior Robotic Vision Scientist at Braintech.

News as of July 31/06: I moved to Microsoft's adCenter Labs, where I'll be the resident vision guy.

From 2004-2006, I was a post-doc working with Jim Little and David Lowe at the Laboratory for Computational Intelligence at UBC. The problems I'm interested in concern robotic exploration and formulating useful policies for exploring large spaces and building visual representations of the world.

I co-chaired the 2nd Canadian Conference on Computer and Robot Vision May 9-11, 2005 in Victoria, BC.

Click on the image at right to view an animation of vision-based occupancy mapping. Over the last few months I've implemented an autonomous exploration and mapping system that uses *only* vision to explore an environment and construct a useful map. The system uses our RBPF SLAM implementation to keep an accurate map, and stereo occupancy grids for planning and obstacle avoidance. The key to achieving accuracy is to perform SLAM on a sparse landmark map, and compute the occupancy grid as a by-product of the RBPF- we never try to localize in the grid. This work is described in our upcoming IROS paper, which has been nominated for best paper. :-)

In theory, RBPF-based SLAM filters scale linearly with the number of samples. In actual practice this isn't the case. Click here for the reason.

I've been involved in an ongoing project to implement vision-based mapping for large-scale environments (bigger than a single room). With the help of Matt Griffin, Pantelis Elinas, Alex Shyr, and Jim Little, we've implemented a system that can handle hundreds of thousands of visual landmarks over long 6-DOF trajectories, without control or odometric information. Click here for more details. This work received the "Best Robotics Paper" award at CRV 2006.

From the Vaults: Vision-based robotics, ca. 1997

Vintage quicktime footage of Invader at the AAAI 97 Mobile Robotics Competition in Providence, RI. The robot used supervised colour-space training to detect objects and obstacles with a monocular camera at 10Hz. We took home first place two years running. (Sorry for the low image quality - this was high tech digital imagery at the time). The second link is more of a 'making-of', featuring yours truly as the mad scientist.

My graduate work focused on the problem of learning a representation of the visual world from an ensemble of images. The work focused on modeling the behaviour of salient features extracted from a scene, as a robot moves through the environment. Click on the image at left for a short video of a set of feature models rendered along an imaginary trajectory. See also my Ph.D. thesis.

I'm involved with the McGill/York/Dalhousie AQUA underwater robot project. In January, 2004 we were at the Bellairs marine research station in Barbados for field trials. (Including pictures and video footage). more footage is available at this CIM ARL page. York also has some more footage here. Update (2004/03/12): Today Wired ran a good story about the project.

Some archives of pose-calibrated images for localization and structure-from-motion research.